???,Klondike, 3:01am
The penguins got out safely, some did not! Who shot the cannon? Nobody knows, Jester has a funny feeling though.. “Could it be him..? It couldn’t!” thought Jester. Jester had imagined a wolf penguin who looked like a werewolf.. His name was TD999 (also known as TD.) He was the most evil penguin ever born, He had red eyes like a ruby and ripped green clothes. Sidie had noticed jester looked terrified.. “What’s wrong, Jester?” Sidie asked.. “N-Nothing!” quivered Jester. “Hmm.. It seems like you are troubled.” Sidie said. “I am n-not..” quivered Jester again.. Sidie seemed concerned.. Jester hurried into his bedroom and locked the door. She knocked on the door several times, but he wouldn’t budge. “Just tell me what’s wrong!!” Sidie shouted. “Don’t you trust me?” Sidie waited at the door. Jester opened the door. “I don’t want to tell you.” He went back to his room and slammed the door in her face. Sidie could hear typing. She left. “What is he doing..?” thought Sidie. Turns out he was searching up about what he had imagined… “Oh my.. He escaped unnoticed until 4 hours later?!” thought Jester Sidie was very curious about what he was doing, she was going to find out on her own. “Awooo~” howled a wolf “Is that a spirit?!” thought Sidie “Awooooooooo~” howled the wolf again. Sidie ran to the howl and forgot all about Jester! Sidie found two shadows on a mountain, Sidie lit her torch and found a wolf and a phoenix! The wolf was shaking and turned into a penguin. “Hello there, Stranger!” said the wolf.. “What?! How did you-” shrieked Sidie “Do not be scared, Stranger!” said the wolf. “I am Dino, What is your name?” said Dino “S-Sidie..” said Sidie terrified “Possum, Get into your form!” shouted Dino. The phoenix was shaking and turned into a penguin and said “Hi!” Without notice, The blizzard was now not just a blizzard, It had tornadoes,lightning,earthquakes and more! Will they survive?! Will the blizzard destroy the Island?! Find out in The Blizzard Chapter V: The War! 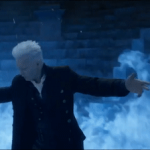